Since the last post I have been keeping busy. Somehow I thought it would be a good idea to squeeze an Anagama firing into the whole NCECA Pre-conference and conference experience. The firing took place during the NCECA pre-conference at Northern Arizona University, in their larger Anagama (about 30'), the crew consisted of some long-time friends from the USU grad program, Trevor Dunn & Robin DuPont, as well as some new friends Cole Taylor (Durango) and Steve Schaffaer (Studio tech @ NAU), some of the NAU students also pitched in too. While it was great fun, I'm pretty sure I wouldn't try it again.
Between stoking and splitting wood we were able to sneak away to the studio to check out the Pre-conference demonstrations by; Don Reitz, Eva Kwong, Christa Assad, Brad Schwieger and Russell Wrankle. The Artstream Nomadic Gallery was also there and set up shop right next to the kiln whed where we were firing. This all made for a bit more entertainment/distraction then your usual woodfiring. 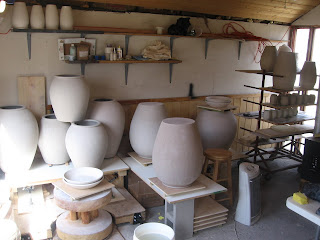 My studio full of greenware bound for the NAU Anagama 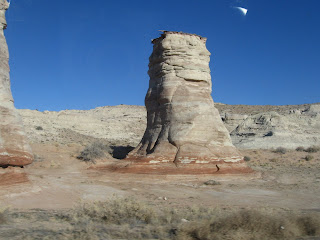 Nice rock formation between Durango and Flagstaff, this one's for you Tony Clennell 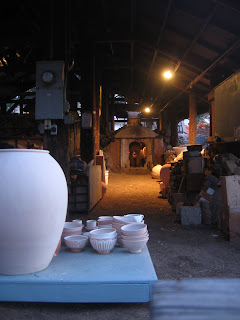 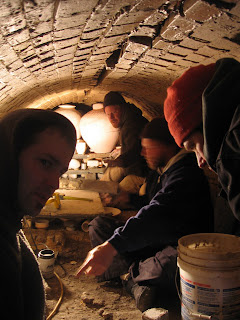 The Crew (far to near) Steve Schaffaer, Cole Taylor, Robin DuPont and Trevor Dunn
Posted by Adam Field at 8:14 AM 2 comments:

As I type it is 10 minutes till 3 AM, my ride to Flagstaff for the NCECA pre-conference (6 hour drive from here) will be here in 2 hours. Up early, you may wornder?? Unfortunately not, up LATE. It's all for good reason. I just finished the latest version of my website, in time for NCECA where I will be spreading the word about the upcoming Korea pottery tour. And that is why I had to get the site up and running with all the new info.

I would love to hear any feedback on the site; does it navigate easily, does it read clearly. I'm not looking for a pat on the back, I just want to know from an outside source if the thing is user friendly or not.

You can use the link for my website on this page (just down and to the right of this text box under my slideshow, under links) or if you feel like typing or copy/pasting then here goes:

Wow, things are getting a bit crazy around here. Between preparing for an Anagama firing at NAU during the NCECA pre-conference, the arrival of my mother-in-law from Korea, putting final touches on the details of the upcoming tour I will host to Korea, redesigning my website, and being a father of a 4 year old, I've been super busy lately and the blog has suffered a bit, but plenty to come from Flagstaff (this and next week), Phoenix for NCECA and all the details of the Korea tour coming soon.

Also, I'm happy to report that the new clay body I used on this round of Onggi pots seems to have made it through the bisque with only one cracked piece!!
Posted by Adam Field at 12:52 AM 1 comment: