It's been a bit since my last post, I've been busy making work (and drying a lot of clay) for the upcoming firing. Also made it up to Fort Lewis College here in town to demonstrate Onggi to the beginning pottery class, my first Onggi demo to an English speaking group. Thank you FLC! 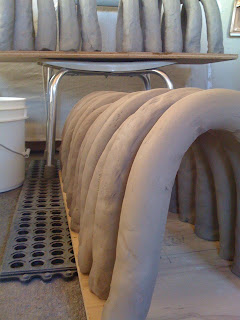 It's always interesting when customers share a different, unintended, use for my work, thats why I was inclined to shoot a picture of my son's latest discovery. It turns out my pots make a perfect diving platform for mini Power Rangers, I'll have to add that one to the list. 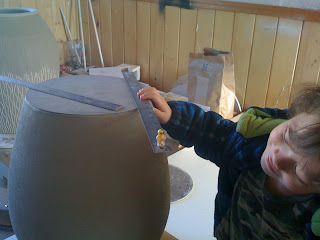 "Studio weather" has returned, with spring-like weather for the last few weeks it was easy to start venturing out of the studio a bit more, that all changed today as the clouds moved in and the snow began to fly, perfect for firing up the studio heater turning on a fresh TAL or Radio Lab podcast and getting to work. I've been focusing on a few different surface treatments as a departure from the strict traditional Onggi jars and am getting excited about this round of pots. The jar in the images below has a twine impression on the top section and I scratched in the lines on the bottom to be inlayed with porcelain slip. 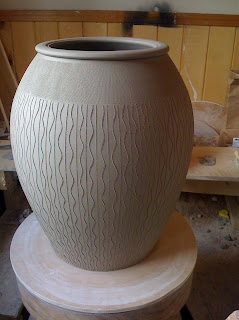 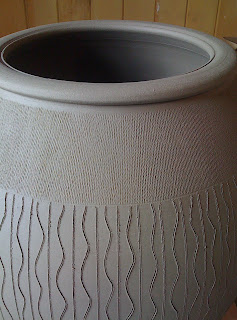 Here are a few pots from the latest firing, not the best photos, but you get the idea. I always enjoy getting a bunch of cups of varied size and design in the kiln especially in an anagama, they're like test tiles and it seems I always gain loads of knowledge about what is happening in different spots of the kiln. 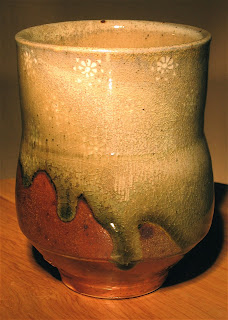 I really like how the porcelain inlay mixes in with what's happening on the surface of the glaze, much more of this in the future! 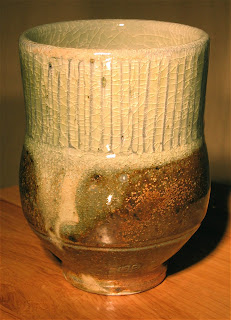 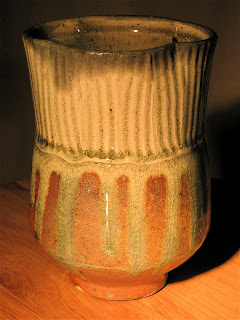 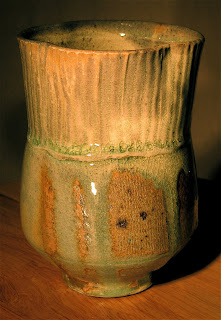 Above, 2 views of the same cup. I added a very subtle twine texture to the bottom section of this cup, i think the surface may be one of my favorites from this firing, just a hint of pattern, not overboard. 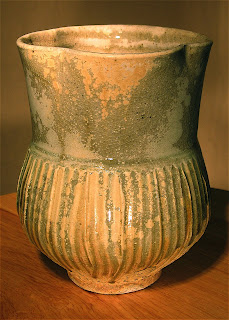 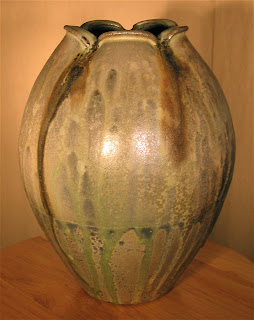 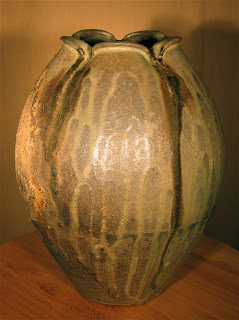 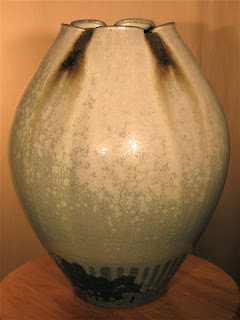 It was nice to get a few Onggi pots in the main firebox, interesting to see those forms with so much ash. 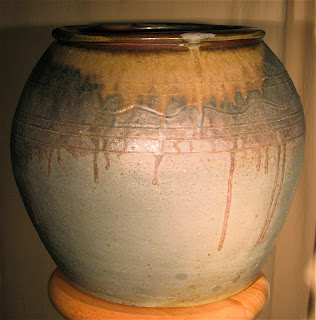 As is usually the case I am not completely happy with the results of the firing, I learned a lot and am excited to put what I learned to use in the next firing just 3 SHORT WEEKS AWAY!! :/
Posted by Adam Field at 11:20 PM 2 comments:

With the cracking trouble of my last round of Onggi style pots I've been a bit slow to get going on the next round. It took a bit of research before coming up with a clay body I could feel good about putting a bunch of energy into. It's a body that Voulkos was using till his last days and I've been assured that it is up for the challenge. Thanks to Mike Haney of East Bay Clay for making amazing clay and for being such a knowledge base when it comes to clay bodies. 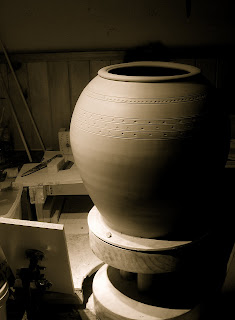 It seems that every time I start to gear up for a new round of pots it takes a few days to really get excited about and locked into my making mode. I'm happy to report that it finally kicked in today! I've been making some traditional Onggi forms and adjusting them to suit my purposes:

The form below, from south western Korea, is traditionally used for storing and pickling shrimp and has a nifty built-in feature, the rim that overhangs into the pot is used as a ledge for placing a stick of just the right size that acts as a temporary handle for hauling the pot. Since I don't think there is much use for a shrimp pot in these parts I decided to scale it down and add a little inlay porcelain decoration, I'm thinking it should be nice with some flowers in it once it's fired. 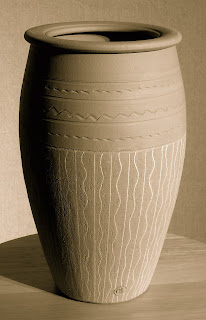 The following image is of an Onggi lid, the nice thing about an Onggi lid is that it generally doubles as a large bowl for hauling the goods from the jar it has been covering. I decided to make some lids to be used as shallow bowls/platters, the decoration in the middle is something my teacher would do to distinguish one size lid from the others. 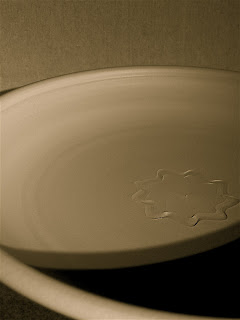 Also, I was having a bit of trouble with some of my larger Onggi forms so I invited a few of my friends over to give me a hand (images below). 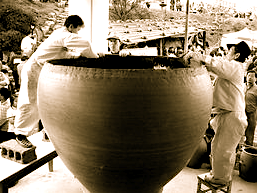 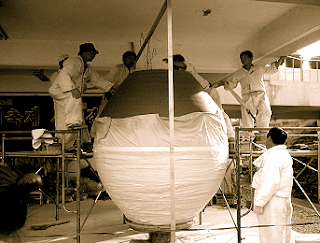 With the woodfiring finished up on Sunday I've had a chance to shift my focus toward some plans for later this year. I've been talking with some of the people I met during my time in South Korea about organizing a tour for American claypeople to see traditional Onggi techniques and studios in person. For those of you not familiar, Onggi is a type of Korean pottery created by a coil and/or slab and paddle forming method used to create very large pots in a relatively short amount of time. In October of this year the town of Ulsan is putting on an Expo that highlights Onggi. On our tour I plan to visit the Ulsan expo as well as many studios of well known Korean National Treasure potters including Ohbuza Onggi where I studied with Kim Il Maan, not to mention the amazing food, sights and people we will meet along the way! On the 15 day tour we will see a good part of the county and get a good idea of the range of techniques used in the different regions. This is the first public mention I've made of this tour, as it comes together I will be sure to post more info here on the blog. 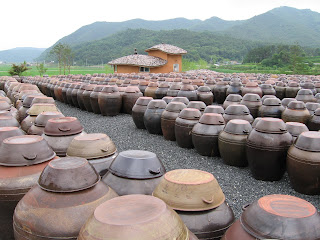 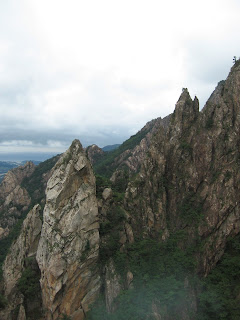 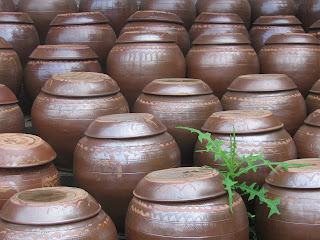 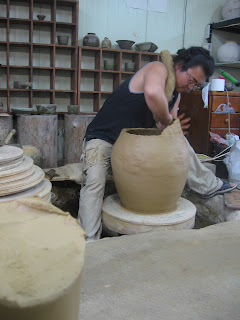 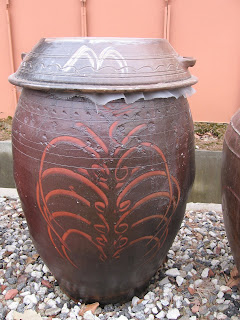 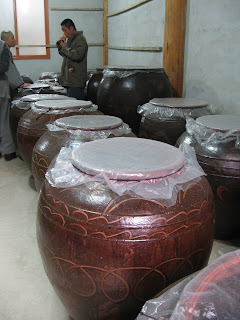 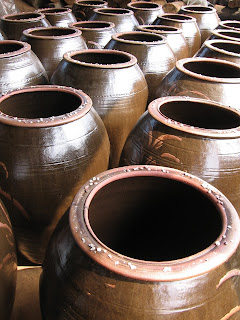 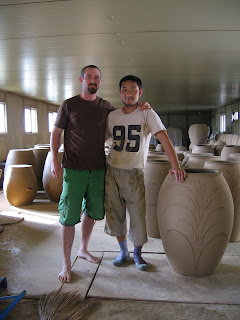