It's been about four months since I made the last pot of my apprenticeship in Ipo-ri, Korea, in that time we've moved to Durango, CO and have been busy setting up home and studio. 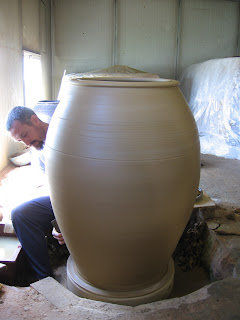 While I was able to start making pots on the electric wheel shortly after we moved in, it took a bit longer to get my traditional Korean Onggi kick-wheel set up. The wheel itself is quite simple, just an oversized banding wheel really. In korea the Onggi wheel is traditionally placed in a shallow clay pit (see image below) with the wheel head about level with the floor making it easy to move/access the very large Onggi jars. Unfortunately our new studio didn't have a clay floor, so I had to design and build a bench around the wheel. 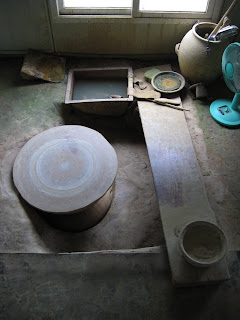 I finished the bench early last week and was able to start on some traditional forms. 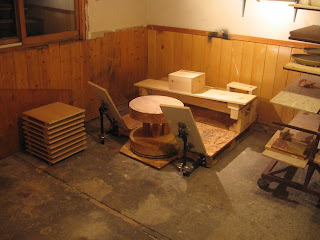 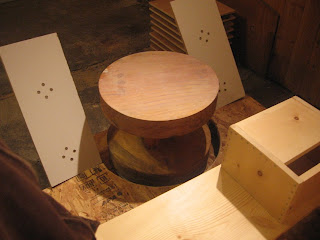 Despite my fears, I hadn't completely lost all I had learned in Korea. After the third pot I was able to work out most of the kinks and was feeling much better about the forms. 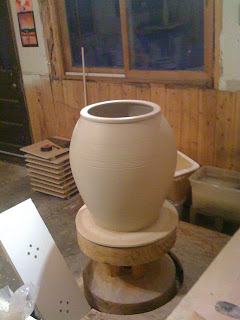 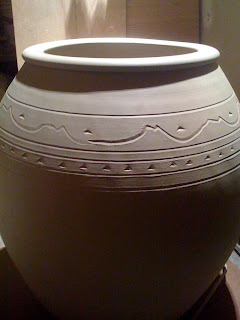 It feels strange to be making theses forms in such a foreign setting back here in the states, I honestly feel like my teacher is standing right next to me watching every move. Although I intend to break away from the traditional forms, I somehow feel a responsibility to make them to the right size and shape at this point, can't quite break the training yet. My first step in breaking tradition will be in the firing of these pots, I plan to fire them in an anagama, I'll be sure to post some photos after the firing.
Posted by Adam Field at 11:55 PM

Looks great! It is crazy how life evolves. I look forward to seeing where these new skills take you. Adelante!

Nice to see your blog! I'm excited to see your big jars.
One question comes to mind after reading this post. Why do you feel the need to "break" the tradition? I think I know what you mean when you say this, but I am curious as to your feelings on the evolution of your work.

I hope you will visit my fiend Peter Karner who lives near Durango, I think Hesparus.

I look forward to reading more of the blog.

Michael,
Glad you enjoy the blog! What I mean by "breaking" the tradition: Onggi, as you likely know, has a very specific function in Korean culture, most of the staple foods (soy sauce, miso paste, kimchi, chili paste etc..) are dependent upon Onggi vessels for production. Also, In a time when all things western rule the pop Korean culture, Onggi acts as a major factor in keeping modern day Koreans in touch with their long and proud history.

So, what does this tradition have to do with me and my immediate culture/society, an American potter living in Colorado? Not much. I am always searching out new visual vocabulary with which to enrich my work, I see my Korea experience as an opportunity to add to my vocabulary. With all that I learned, I am now set with the task of making these elements work with my style of pottery, incorporating and referencing without copying verbatim.

I know this was an over-explanation, it was as much for my sake as yours, thanks for pushing me to put it into more specific words.

I met Peter a few weeks back, good potter, good guy, planning on a visit to his place when the schedule allows.

Hi Adam, I just wrote a long thought on your comment and somehow hit the wrong key and it disappeared!?! I will try again, to follow up on your email comments. First of all thanks for going 'in depth' with your comments. I'm working on a lecture on this theme of tradition is very much on my mind.

I think many of us wrestle with this concept or explanation of tradition or breaking tradition. Since I came up in the university system and the punk rock revolution of the late seventies I was always into breaking with traditions. (When I was in art school, we called it "post-modernism". ) But there was something very appealing to learning a craft and becoming part of its rich history and traditions. I feel that I pay homage to the pots that inspire me by trying to make those pots, copying as you say, and understand them the best I can. Yet I am aware that tradition is not static and the pots come alive only until they make it through some series of rigorous mimicry and internalization. That's when I think our work 'breaks' with tradition. Maybe it is in the very act of breaking with the tradition that propels traditions and keeps them alive.

Anyway, I feel as if I'm cutting in line, inserting myself into traditional crafts. I'm a wannabe folk artist with a BFA. It's probably the plight of many of us with art degrees. I can fully appreciate your seeking for I am a perpetual seeker. Is this an "american" condition? Do you think that it's peculiar to our culture? I don't know. Thanks for stimulating this conversation. The nice thing about these pottery blogs is that we have a forum to begin discussions and sort these things out.

Michael,
I like and agree with what you wrote about the nature of tradition: " I feel that I pay homage... ...propels traditions and keeps them alive."

When I spoke of breaking tradition, maybe I would have been better off to have said "making complete an incomplete or disconnected tradition". If I were to creating traditional Onggi forms here in the states with no intention or possibility for intended traditional function it would only be a fraction of the true tradition, an "incomplete tradition". It would be like getting my son a full blown snowboard gear set-up (which he very-much wants right now BTW), loadin' up the car and headin' to the beach. The second half of the Onggi tradition takes place after the pots are fired, when they are put to use in their culture of origin. If I aspire to make work on the same level as Onggi I feel I will need to create work that has an appreciated and functional place in MY culture and community. This motivates me to explore options outside of the strict Onggi boundaries.